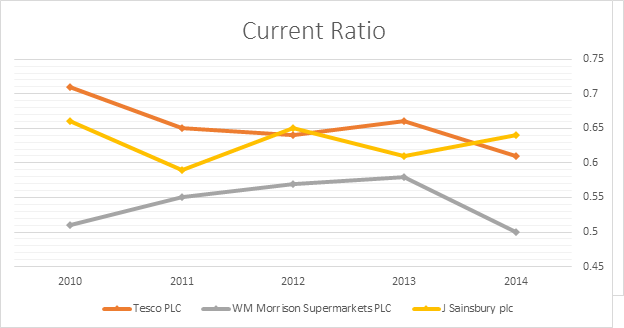 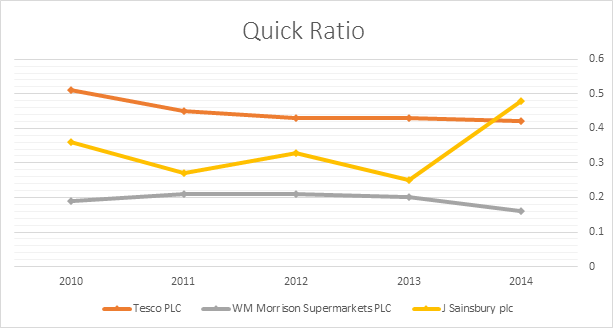 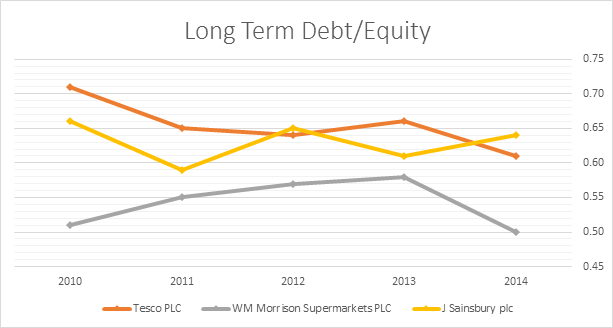 Long term debt to equity belongs to long term solvency ratio. It helps to identify the financing structure of business. As it shows relative financing of long term debt and equity, the ratio higher than one shows debt funding is higher than equity and ratio lower than one indicates equity funding is higher than debt. For all three companies, portion of equity funding is higher. As investors prefer stability of business, stable financial structure is preferred over volatile structure. For every $1 in equity, debt funding is $0.61, $0.64 and $0.50 for Tesco, Morrison and J Sainsbury respectively in 2014 compared to $0.71, 0.66 and $0.51 in 2010. end reversal identified for Morrison in 2014. 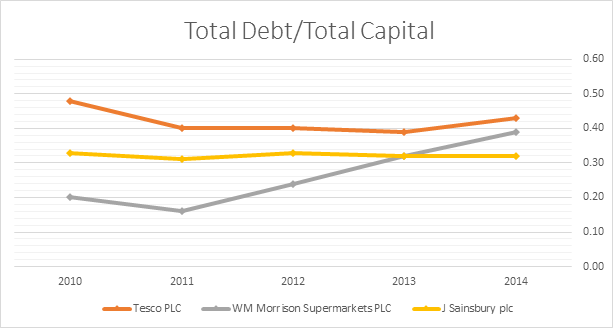 Total debt to total capital ratio shows proportion of debt funding used to finance the resources of the firm. As higher debt ratio increases default risk it’s not recommended that companies have higher debt ratio or increasing debt level. Moreover, as it belongs to financial structure ratios, it’s desirable that the ratio remains stable. Debt ratio of Morrison is increasing since 2011 year on year which is somewhere negative indicator (GÂDOIU, 2014). Debt ratio of Tesco and J Sainsbury is stable over the years but debt ratio of J Sainsbury has been more stable. 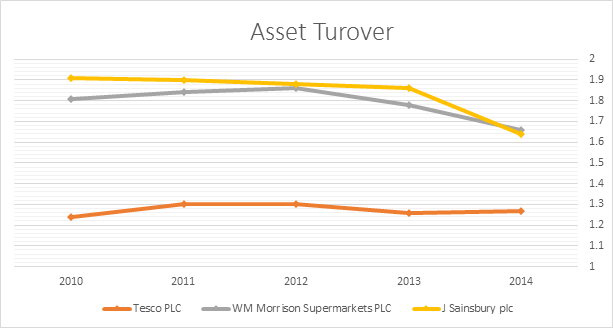 Asset turnover ratio shows sales generated over the total assets. Higher ratio shows the firm is able to generate more sales with available assets. Though asset turnover ratio is increasing for Tesco Plc but the ratio is already at lower level than other two companies. While Asset turnover improved by 2.42% for Tesco and declined by 8.29% and 14.14% for Morrison and J Sainsbury respectively. Still, historical performance of J Sainsbury is more reliable than other two players. 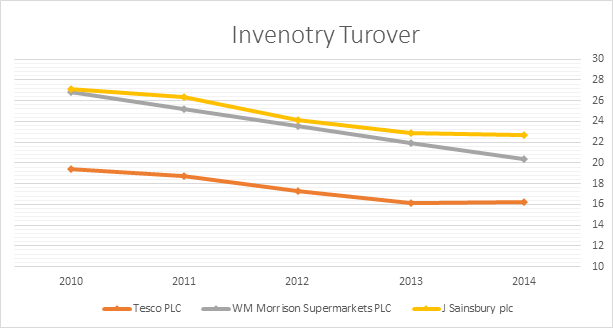 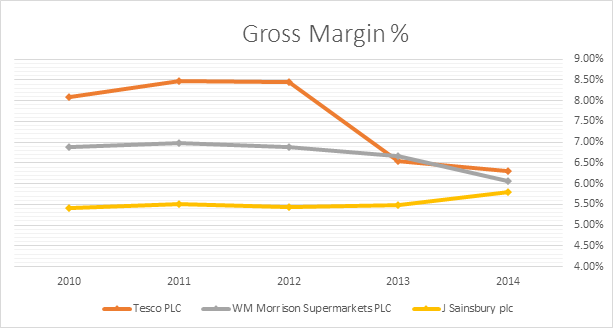 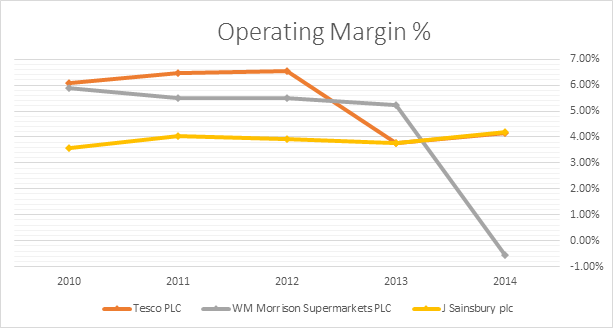 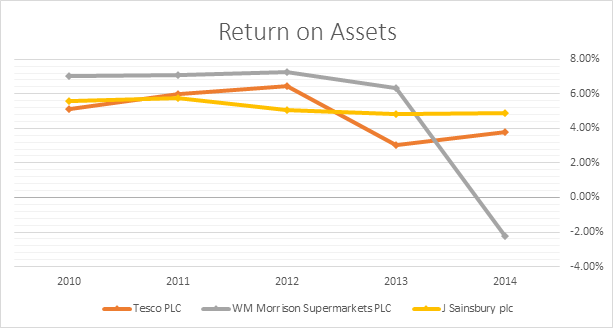 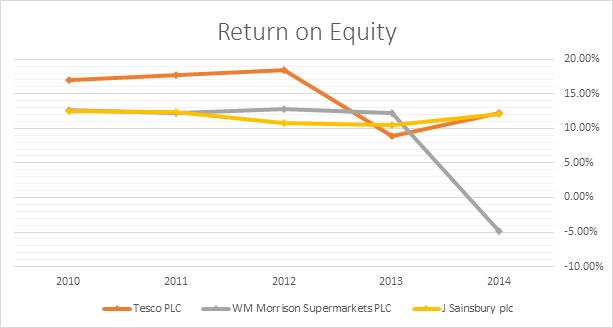 Employee base of J Sainsbury is lowest and even reduces over the years which shows the firm is able to achieve higher revenue though numbers of average full time employees decreased (GÂDOIU, 2014). While Tesco plc has highest number of employees has also lowest revenue per employee and year on year employee base improved except 2013. WM Morrison has employee base round 90,000 to 94,000 between 2010 to 2014.

WM Morrison is worst performing companies amongst three. The major areas of improvement are current ratio, quick ratio, asset turnover, inventory turnover, operating margin, returns on assets and return on equity. The liquidity ratios of WM Morrison are quite lower than other two firms and especially quick ratio is significantly lower on absolute term and relative term as well. So first area of improvement is to improve the quick ratio which will automatically improve the current ratio as well.

Finally, the company needs to work on efficiency as well. Asset turnover ratio and inventory turnover ratio is declining year on year for last five years and it’s the only area where firm is competitive to other firms. As it’s a core strength of the firm and turnover ratios are declining other areas are being affected such as revenue growth and net income.

Total sales area of WM Morrison Plc is quite lower than J Sainsbury and Tesco Plc and it decreased by 16.6% in last five years. It’s recommendable to increase the total number of stores and market area in order to boost the revenue and sales. Also average employee per sales are square feet is much higher than other two players. Average employees per thousand square feet of WM Morrison is 8 against the average 2.1 and 3.6 employees per thousand square feet of Tesco Plc and J Sainsbury respectively. So, the company must reduce the employee base and improve the coverage area per employee to be competitive with its industry peers.

So, here are major recommendations which are required to turnout the situation of WM Morrison ("WM Morrison Supermarkets PLC, MRW:LSE financials - FT.com", 2016).

Though financial ratios help to understand financial position of the company and to take investing decision but there are some drawbacks associated with it. Followings are limitations of financial ratio analysis.

The report prepared by production director missed some important consideration while calculating income tax implications. As the machine will qualify for a 25% writing-down allowance on the reducing balance, pre-tax profit will reduce by only allowable capital allowance not depreciation. As capital allowance is lower than depreciation amount, tax liability is much higher than projected by production director. Below table shows after tax profit for next three years and total profit of three years would be $50,083 and hence return on capital investment would be 33.4%, much lower than expected return of 40.2%.

As tax liability is delayed by one year, applicable tax of third year would be paid in fourth year. As capital allowance can be claimed as balancing allowances in third year, taxable income turns negative ("Examples of Capital Allowance Tax Calculations - Brookson Ltd", 2016). So, the company can adjust the loss against the profit in coming years. We would include the possible gain from loss in third year tax liability in fourth year. As shown in below table cash flow is positive for all four years and it seems company is able to recover investment of £150,000 in three years itself. But considering 18% cost of capital, present value of future cash flow is £147,114 which is lower than investment of £150,000. Hence, net present value of the proposal is -£2,886. It means project is financially not feasible for investment.

GÂDOIU, M. (2014). ADVANTAGES AND LIMITATIONS OF THE FINANCIAL RATIOS USED IN THE FINANCIAL DIAGNOSIS OF THE ENTERPRISE. Faculty of Economics, University of Piteşti. Retrieved from http://economic.upit.ro/repec/pdf/2014_2_9.pdf

Please fill in the form