Globalization refers to a process by which organizations expand their business & operates it on an international scale. It involves free movements of goods, services & people across the world. It is generally integration of economies with all other economies of the world. Globalization has its impact almost in everywhere around the globe, in this assessment there will be brief discussion & comparative analysis of the influence of globalization on the East-Asian economy and Australia. East Asian countries would mainly include China, Mongolia, Thailand, Indonesia, South & North Korea, Japan & Taiwan.

Influence of globalization on China & Australia

The United Nations organization declared 1960’s as the era of globalization. This had encouraged free trade and resulted in giving customers new choices & alternatives of products creating a satisfied market. Poverty rates are decreasing with increasing GDP & income rates. It has been witnessed in developing economies of the world. Globalization has greatly influenced the China as years ago; there has been rise in the performance from the past years with the address of globalization. 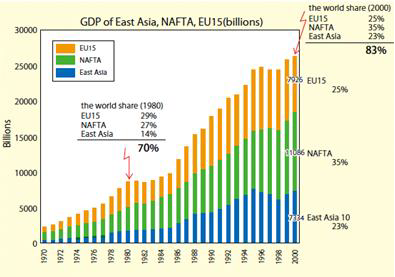 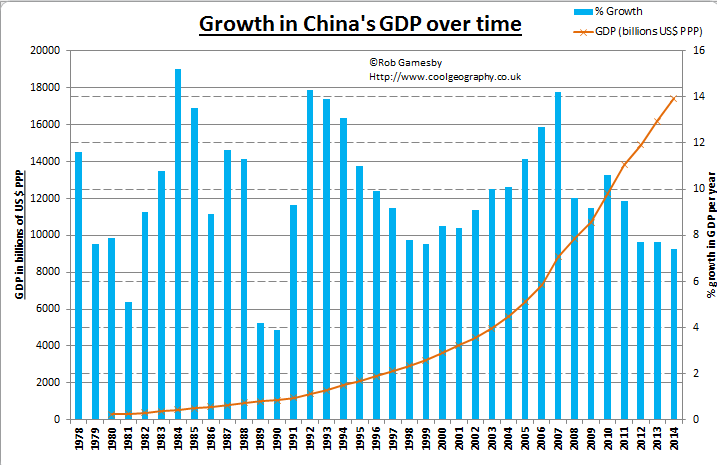 It is an important phenomenon as beyond everything its strategic, economic & social consequences are changing international relations. China is here to stay and will follow the same growth over next 15years (Miller, et. al., 2010). This growth has positively affected region's peace & wealth. The World Bank forecasts high growth of the Australia economy over China. If these countries maintain & manage their success & growth in the same way & stick to their force of liberalization & wise policies, they may pose a challenge for the Australian economy. China had made this globalization by increased production, high savings rates, emphasis on education & strong forecasts of foreign investments (Wan Jr, 2011). These investments proved to be beneficial and provided with high growth rates, this to be continued for next 15 years or so. China have good financial conditions & can overcome difficulties. The export rate is very high in China and became world largest exporter. Compared to Australia, globalization was not new. Australia was already involved in a trade, investments, technology, communication, migration of labor since its initial formation & had great influence. The floating and irregular dollar of Australia intensified the impact of globalization.

The Government of Australia had planned many strategies to continue its growth in the world such as Ten-year enterprise tax plan for creating jobs, continued investments in National Innovation & Science Agenda, encouraging young and talented employees to display their skills to employers(Arnove, et. al., 2012). The government is dedicated to making responsible decisions in its economic and budgeting plans to invest its funds in effective places. It has done strong investments in the mining sector but an uncertain global outlook especially from China pose risks for Australia. 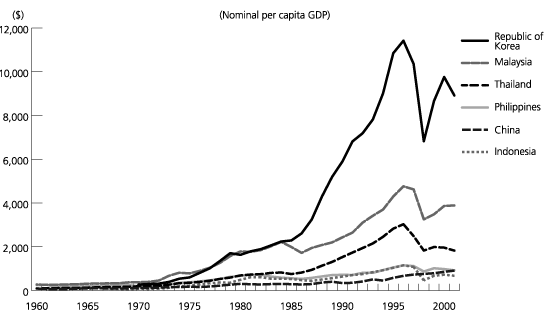 China significant growth was no less than a miracle. The strategies behind their massive success were macroeconomic control, government’s intervention in the industrial markets and policies of free trade, they had huge capital savings, which they invested effectively& other good policies. They relied on continued openness & engaged with the world economy. Economic crisis & challenges were a great lesson and helped these strategies to work.

In China, there is an open attitude for world trade & industrial practices, their GDP growth rates reflect increased exports than that of Australia's already developed economy (Australian government, 2017). Their industrial policies made them competitive in the market and had greater chances of development. Studies have shown that such policies of free trade and policies are effective for growth. 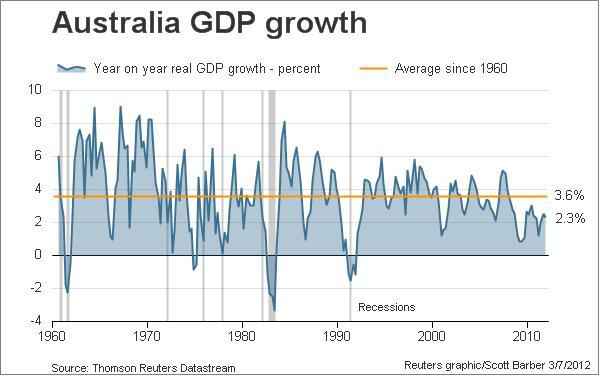 The policy of China is becoming advanced and discarded the policies of full export openness but still sustained growth as their policies had adequate restrictions and rules. In comparison, Australia suffered floating rates of the Australian dollar in the market the funds were flowing outside US markets & dollar was falling. Local markets were deploying due to imports from other countries. To overcome these, it signed agreements with various countries like China and expanded its economy. It is also notable that if the growth in advance economies will be weak then it will be weak in other economies too because the US plays a significant role in crediting the western consumers of that region.

The main sources of income in Australia are wages & salaries, Business profits, Property income and social sources. High levels of income help individuals increase their wealth. In Australia, richest get 49% of the total wealth of country while the poor only 4%. Highest fifth earns 12 times higher than the lowest fifth, and the ration becomes 5:1 when tax & transfer payments come into the picture (Beeson, 2014).

Australia has been seen as one of the best places to live so far. According to 2017 Social progress Index that, measures the quality of life, well-being of society, independent of wealth, Australia has dropped its position from fourth to ninth. To compare, other countries of East Asia such as Japan, Thailand, Malaysia, and China are below than Australia. Moreover, Australia is ranked as a fourth healthiest nation in the world & fifth for advanced education. One can expect high living rates and quality of life in Australia. China is relatively in a medium when compared to 128 countries of the world. They have a moderate rate of living standards & incomes due to high population rates and a large proportion of areas.

Reasons for differences in both the economies

Following are the reasons for differences in both the economies: 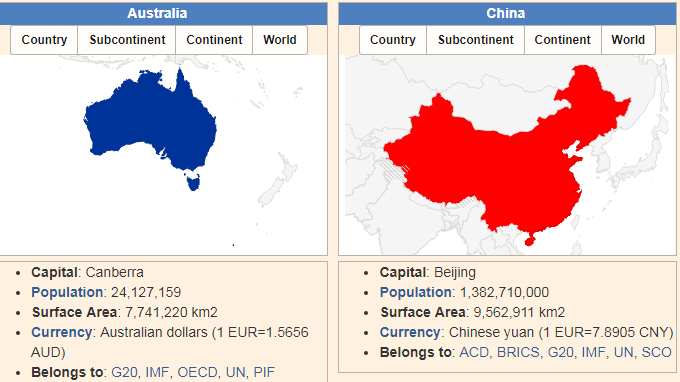 Australia was suffering from a declining economy, high rates of poverty & unemployment in its initial 80’s. Australia is one of those countries, which has been affected by globalization socially, economically & politically in different ways. Australia started foreign investments in its opening of the economy, which enhanced the quality of life. Now more foreign companies were freely allowed to do business in Australia. This made Australia's market more competitive & modern (Wan, 2011). The end of restrictions on international trade helped in increased living standards & made Australia successful in the globalization process. Similarly, in China, liberalization of trade enhanced the GDP of countries and they became so successful that other countries started to import products and more exporting to others; Australia started importing cheap raw materials from China, Indonesia, India & Thailand. This greatly affected the local markets of Australia. On one side there was a boom in globalization in China which reduced poverty and increased employment opportunities, Australia was moving towards High-tech technology markets and was succeeding in its agricultural, service and mining sectors.

In 1965, income per capita in dollars of East-Asian economies was $2,000 significantly lesser than that the average of Australia $3,400. In 1992, the income per capita averaged to $11,100 that was twice as high as that of Australia & North America. There were a huge amount of exports in China including Australia. These trends are intense except for Australia. In the field of part & components, the imports from China were large in amount except Australia. There was an impact on various forms of trade due to FDI. Australia also focused High-tech markets and increased its market share over the years. Growth in various sectors such as service, manufacturing, agriculture & mining was recorded due to globalization(Rasiah, et. al., 2010). There were other barriers to trade such as import duty & corporate taxes. Companies in Australia preferred to invest in countries of China where there were significantly fewer barriers to trade and cheap import rates. As a result, there will be less cost of the product even if it crosses many borders. Studies have shown that FDI from the United States grew faster in less corrupt countries like Australia than in China. These factors also affect the flow of FDI, which affects economic conditions. Further, larger economies have more high GDP contribution as they can offer a wide variety of different products than the smaller countries like Australia (Hajkowicz, et. al., 2011). Distance is another factor, which influences trade and investment relations. Australia is less in proximity to other countries, which prevents it from bilateral trade & incurs large transportation costs & information costs. In short, more is the thickness of the market move will be the trade, investments, and companies. This results in increased profits and increased international trade.

Australia has enough natural resources and less population, which posed a great advantage for them whereas China are overpopulated and have scarce resources. China has been growing rapidly in recent years. The regions of China are densely populated and large in geographical areas. Therefore, pose a major threat to their sustainability & well-being of people living in these areas. There are vulnerable to major problems such as economic crisis, climatic disasters, deforestation, and freshwater and marine water contamination. In 2005, environmental sustainability index reported these areas having good status for environmental status but most of the East-Asian countries were ranked at the bottom. They are not moving towards a sustainable society even with their strategies alike Australia(Business Insider. 2017). Australia has designed a set of strategies to use set of resources in a sustainable way. Their policies include minimizing pollution, complying with the legal obligations and apply a systematic environmental standard that goes together with the international standards. They have made policies which aim to reduce the impact of government operations on the environment.

China trade was dominated by the demand from other countries, particularly US & Australia. However, Australia is at a low point in the realm of analysis of business cycle. It has many prospects of better conditions ahead. Australia needs to grow its business to eliminate poverty rates & unemployment possibilities. Analysis of its economic cycle i.e. its production, trade, and consumption of goods & services is directly related to its trading partners. The growth of Australia's trading partners have been relatively stable, whilst exporting much to its neighbor Asian countries majorly china. The rest of the advanced economies have weak growth, but they are also important to Australia because of their effects on global financial conditions & indirect linkages of trade (Beeson, 2014). The economy of China is in different phase of the business cycle. It has low rates of inflation, monetary policies are consistent, which lead to the expansion in their balance sheets low-interest rates globally & changed the prospect of ‘yield' by making important implications for exchange rates. However, China had strong synchronization of business & trade relationships with cross-countries. China growth has greatly uplifted the level of trade in comparison to Australia.

From the above assessment, it can be concluded that globalization has greatly influenced the economy of China and Australia. China is rapidly growing in terms of international trade by making foreign investment and openness in trade policies. There is a major impact of globalization, which has resulted in influencing FDI and GDP rates. There are many strategies used by both the economies, which helped them promote growth and sustainability. Globalization has helped in creating more employment opportunities and resulted in developing more innovative and competitive markets for the consumers.