The crisis popularly known as the global financial crisis began in the month of July in year 2007. The lack of faith in the mortgage properties of the United States investors started the panic attack which ultimately resulted in liquidity crunch leading to a crisis like situation. The investors rapidly began to withdraw money from the financial instruments further making a panicking situation even worse. The stock market crashed after this situation further worsening the situation even at the global level. This was further augmented by the burst of the house bubble.

House bubble, also known as the subprime crisis was the crisis which was created when the owners of the houses who had mortgaged the homes to take loans found out that they were not able to pay the mortgage amount.  The banks then found out that the homes which they had taken as security were valued far less than the loan they had originally handed out to the takers. This essentially resulted in liquidity crunch for the banks putting the fear of banks shutting down. This resulted in closure of the largest American Bank the Lehman Brothers.

Below is the diagrammatical presentation of the global financial crisis and the losses incurred during it (Shah, 2013)- 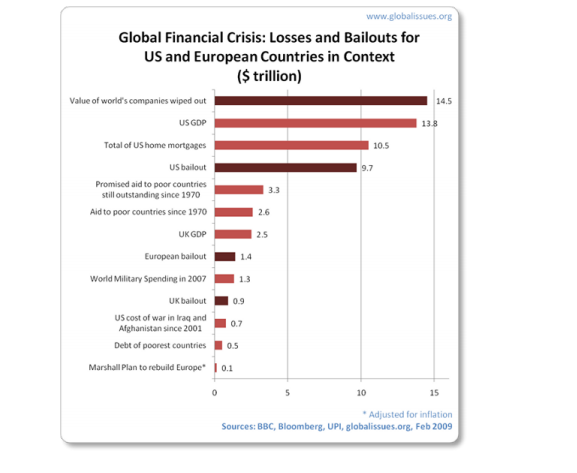 If we look further as to why the financial crisis occurs at any point of time, there are certain common factors (Capital institute, (n.d.)). Some of them are listed below-

Global financial crisis according to some reports could happen again. The logic behind this assumption is indeed quite simple. The global economy is developing and improving at a pace faster than the USA’s economy. The economies are linked to each other and the global economic development shall lead to a recession like situation again. The deflation in United States of America is again coming and as claimed in some reports, the condition of the US economy is in far worse shape. The global economic crisis is further strengthened by the fact that the crude oil prices in the beginning of the year is $30 barrel which is too low (The guardian, 2016) The USA’s economy is hit by this recent development. The diagram below gives a better idea of the crude oil situation for the past 10 years. 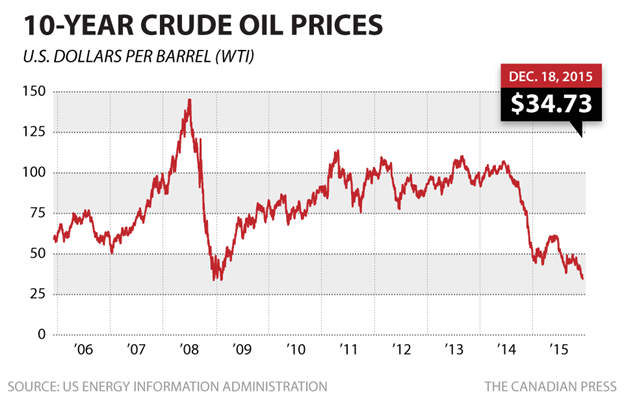 The reforms by the USA’s government and the global economic changes have controlled the situation to a certain extent but as the size of the economies go larger and larger; the fear of bigger damages and bigger failures also arises.

The chart below shows the capital flows to the developing countries from the year 2005-08 ( in United States Dollars): 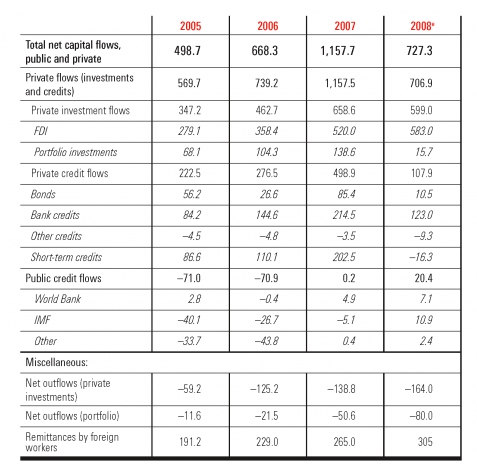 The developing countries faced the capital outflow during the major part of year 2008 and 2009 where several countries like Argentina faced capital outflow to the tune of USD 20 Billion, Mexico faced outflow to the tune of USD 19 billion. Similarly, the remittances by the migrants from the developed nations to the developing nations virtually vanished for a good number of years further bringing down the capital induction in these countries. Some of these countries even faced the backlash from the developed nations where the foreign workers were repatriated to the home countries thus burdening the already sunk economies of these countries. The countries from the Asian side also faced other challenges. For example, the total exports from Bangladesh dipped to an alarming rate. The tourism income in the African countries crashed greatly. The income from copper in the countries like Zambia crashed to a staggering 54%.

The Nepalese economy is one which was mildly affected by this crisis (Khadka and Budhathoki, 2013). There was no sharp dip in the gross domestic product, there was no insolvency reported in financial institutions. This was on one hand. On the other hand, the income of the local people dipped as the income of the company dipped. This was because the major source of earning for the local people is tourism which sharply fell because of the dip in the foreign tourists. The rate of remittances in Nepal after the global financial crisis of 2008 has subsided. The export of Nepal made clothes has also been hit. Also, Nepal is one of the least developing countries in the world. The foreign help shrunk to very small amounts after the global financial crisis of 2008. Foreign Direct investment decreased to very marginal levels during the crisis but it has increased significantly during the last several years.

Proposed reforms on the world scale after the global financial crisis may be studied as under:

There were regulatory reforms at the international level and at the national levels of all the countries. Some of them could be analyzed as under

The global financial crisis of year 2008 brought a lot of damage to the economic condition of the world. The fall of the Lehman brothers was the eye opener for the entire world. This was because the invincible was defeated within a matter of 10 months. USA’s largest bank had collapsed. The house bubble burst and the subsequent panic had led to the government with infusing the economy with a bailout package of $ 1 trillion. The developing nations were hard hit. However, as the other economists predict, this was just a trailer of the large damages coming ahead unless the governments make huge changes in the fundamental economies of their country which could only averse the further financial crisis of the world. The crisis hit the economy of countries in Asia and Africa most because these countries directly depend on the economies of European nations for their income. The foreign remittances and the exports from major part of their income. Most of the African nations are solely depended on the tourism industry which came to a halt during the financial crisis. The reforms have taken place as given above and are still going on to make oneself immune to vulnerabilities of the weak economic system.

Justin Davis, 2014. Global Financial Crisis – What Caused it And How the World Responded. [Online] Available at http://www.canstar.com.au/home-loans/global-financial-crisis/ [Accessed Date 7th May, 2016]